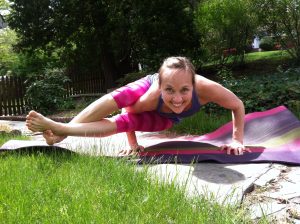 Betsy Stephens
Betsy Stephens, a mother of two living in West Orange, has been practicing yoga since 1994. She received her teacher training from Om Yoga in NYC 2001. In 2011, Betsy began training to become a children’s yoga teacher. She has studied with Karma Kids, Ashram for Autism and Go Grounded. In 2013, Betsy opened Yoga Playhouse where kids can learn to connect to their breath, minds and bodies through yoga concepts and poses. Aside from health and brain development benefits, Betsy feels yoga can cultivate a child’s appreciation for themselves and the world around them. When she’s not teaching at Yoga Playhouse, Betsy teaches inner city children in Newark with the Newark Yoga Movement. She also worked as the Artist-in-Residence, blending yoga and children’s literature at South Mountain Elementary in South Orange.

Betsy is also the founder and director of Moore Love, a non-profit organization that promotes kindness in schools. She is co-founder of Little Philanthropist at the Gregory School in West Orange. The class raises student’s awareness of needs in our society then empowers them to make a difference. Through all these endeavors, Betsy’s hope is to encourage kids to lead with their heart. 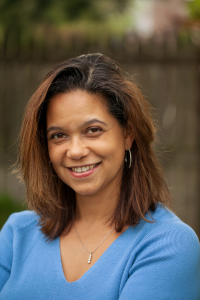 Amy McCampbell
For years, Amy practiced yoga off and on… mostly a class or two here and there as part of her regular exercise routine. She was a busy television producer, so she thought of yoga as a great workout and a way to find some calm. It wasn’t until she developed a regular practice that she was really able to tap into and appreciate what yoga could bring to her life. Sometime in 2015, Amy decided to practice on a daily (or near daily!) basis. Incorporating yoga more fully into her life had so many unexpected benefits, from increased strength to improved focus to learning how to tune out “that negative voice in my head.”
Amy completed the Yoga Playhouse 24-Hour Teacher Training in December 2017 and is super excited to introduce children to all that yoga can offer. As part of her professional experience, she spent more than a decade working ontelevision programing for child development issues, in particular looking at how to best promote the skills kids need to succeed. One thing she learned after interviewing many of the leading researchers in the field was how important it is to promote attention and mindfulness in children. Amy says yoga is the perfect tool to help them tap into these important skills!
Some other background on Amy: She grew up in South Orange and now lives in West Orange. She’s the mom of a 12-year-old Yoga Playhouse yogi, a member of the Roosevelt Middle School PTA, and a coach of the Girls on the Run Heart & Sole program.

Meredith is a school science teacher with 16 years experience and is a mother of two. She holds a BA in Fine Arts and an MA in Special Education. Meredith has completed her 200 hour Yoga Teacher Training at Jai Pure in Montclair.
Teaching yoga to teens has always been a passion of Meredith’s and she continues to do this at a high school in Newark. Meredith is excited to teach the fun and beneficial practice of yoga to younger kids so they have a way to access the calm and happiness that practicing yoga can bring.

We teach private classes for grown-ups and kids.